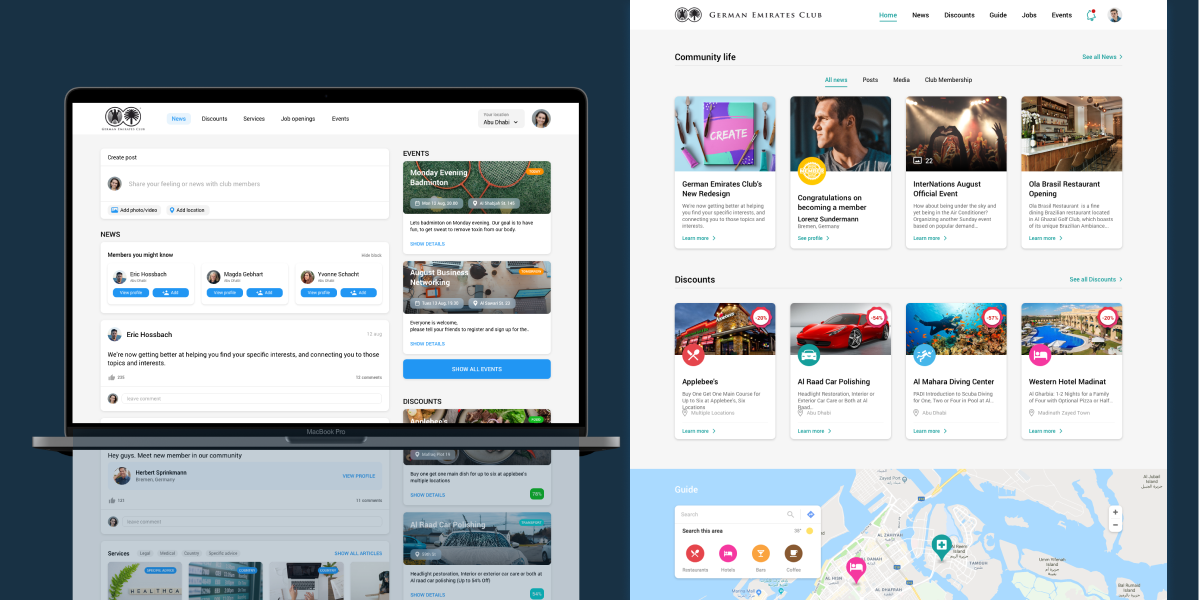 The Bamboo Agile crew is no stranger to web application design. With us having built dozens of successful websites, it’s safe to say that we have somewhat of an understanding of what works well and what really doesn’t. That being said, we gain plenty of knowledge with every new project; a great example would be our recent gig, which has turned out to be a pretty fascinating redesign experiment.

How we got involved

It all began with an RFP: German Emirates Club, a huge community in the UAE, wanted to enhance their website. We took a look at what we had to work with, and were met with a fairly standard community platform, which provided some information on the company, general news, event announcements, and other sorts of relevant data. Problem was, it wasn’t laid out in the most intuitive way. Most web designers know that in order to keep engagement high, the information has to be expertly organized and served in a digestible, attractive package. What we needed to do was give the UI a substantial overhaul, making it a lot more professional, usable, and inviting.

So, Bamboo Agile assembled a team of one project manager and two UX/UI designers. We had 2 weeks to develop the new interface, meaning there was absolutely no time to lose.

But before starting, we had to set several things straight. First of all, what did the GEC company stand for? From what we’d gathered, the main aim was to provide the growing German community of the UAE with a substantial, high-quality platform, promoting cooperation and helping its members adjust to an unfamiliar environment. Therefore, the website itself had to be welcoming, clean, and easy on the eyes. People did come there in search of assurance, and being met with a light, the familiar design would help a lot in making those visitors feel at ease. At the very least, neater aesthetics would build an impression of a business that knows what it’s doing. Having made our goals for the project clear, we got to work.

Several days passed, and our team was ready to present two different mockups of the website’s new interface.

The main focus of the first version was dividing the main menu into blocks: community, discounts, guides, job openings, and so on. Those could be accessed either by scrolling down the website’s main page or by selecting the respective section in the header, which was made smaller, but much more distinct, with a plain black version of the company’s logo standing out beautifully against the pristine white background. It’s worth mentioning that the original header followed a somewhat similar design philosophy, however, the contrast was not nearly as stark, and the logo itself – while fine for its time – looked slightly outdated.

We’d also reworked the guide part of the website to feature a big interactive map, making it more colourful and easy to use. What’s more, we’d implemented some social media-like features, such as simple profile customisation and instant notifications.

The second mockup leaned heavily into social media-inspired UI. There, the facebook-like timeline took the center stage, while the above mentioned blocks were moved to the far right.

The header was redesigned in a similar fashion, with a tab showing your current location. The footer featured the same company logo, as well as some extra links, including those leading to GEC Android and iOS mobile applications. The first mockup’s footer had almost identical functionality, but it’s important to note that the original was, in comparison, very lacking.

In general, both redesigns boasted a much cleaner palette and friendly, usable, uncluttered layouts.

Overall, we were very proud of the results. Comparing our mockups to the original GEC page was like looking at two completely different internet eras. While the initial site was competently made, it absolutely needed a breath of fresh air – both in terms of its function and its visuals. That new look couldn’t come at the cost of the company’s identity, however. Trying to senselessly cram every current trend onto a fairly conservative page is a recipe for something that in no way represents the business at hand.

The redesigns made by the Bamboo Agile team combined the core essence of the GEC brand with novel, carefully applied state-of-the-art web design sensibilities. Each added feature served a purpose, each element built on the business’ key principles and goals: providing long-term social support and creating a safe and secure online environment for the German community in the UAE. Finding that balance between old and new was by no means an easy task – it never is. Even so, we’ve managed to achieve exactly what we’d set out to do: enhance the good, remove the bad, and bring the GEC company’s online image into a new age.