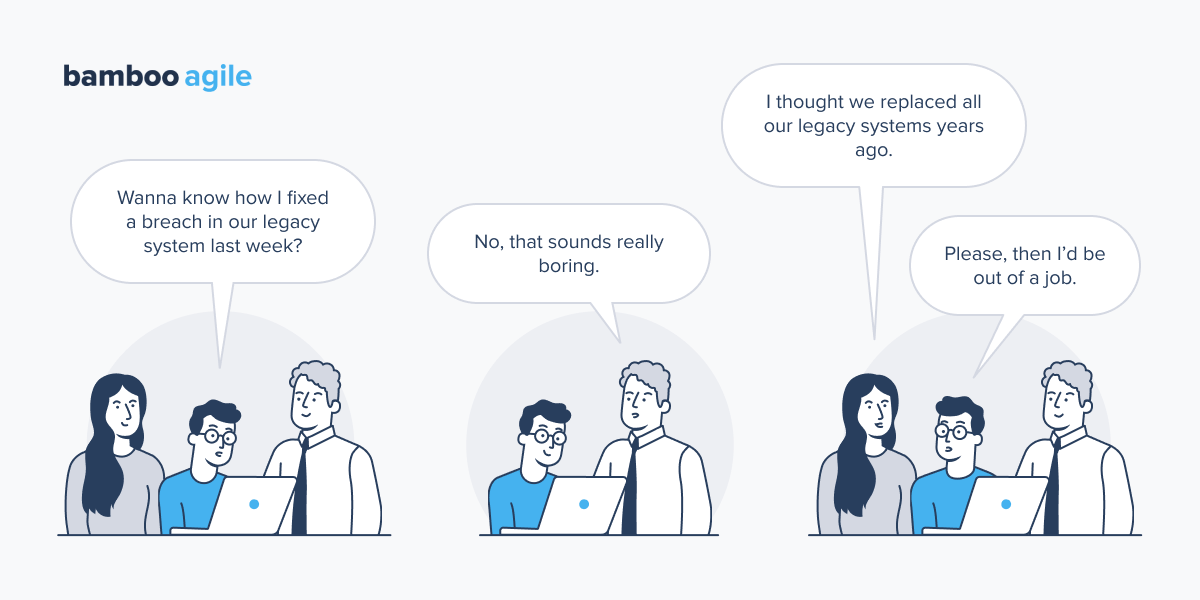 Organizations using legacy systems for years follow a simple rule. If it ain’t broke don’t fix it. Or if it works it works. They believe that applying a new solution or simply upgrading the existing one is not worth it. At least, that’s the case with many companies.

Modernization of legacy systems doesn’t come cheap, to be fair. Of course, it’s more cost-effective than building a new app from scratch. However, there are a bunch of factors that affect the app modernization price.

Let’s consider why legacy systems modernization is a worthy investment and reveal the aspects affecting the total cost of such a venue.

What’s the state of the application modernization industry?

Many companies don’t want to invest in upgrading their software. However, industry numbers show that legacy systems modernization is increasingly common. Look no further than the research report by MRFR for proof. According to it, the global application modernization services market will reach the size of $24.8 billion by 2030, with a CAGR of 16.8%.

It’s a highly competitive field with numerous well-known IT businesses on board. For instance, the modernization industry key players include IBM, Oracle, Accenture, Dell Technologies, Fujitsu, and many others.

What are some legacy software examples?

Banks, governments, and retail companies are the most common victims of legacy software. Even background investigation systems and commercial organizations aren’t safe. Their systems have been in place for a very long time. And as populations and userbases grew, so did the data loads.

Modern platforms are already built to scale. Thus they are ready to tackle such issues. But consider this: COBOL is still the most popular programming language among federal governments. A language that was first developed in 1959. Of course, it’s not built to handle modern loads. And of course, it can’t overcome modern software security issues.

Other common examples of outdated tech include SAP, SharePoint, Oracle, .NET, and Lotus Notes. While not as old, they simply can’t stand to newer platforms. Because of that companies are often stuck with limited functionality.

SAP customisations are hard to make as per today standards. Similarly, adding new features to Oracle or .NET is slow and awkward.

SharePoint was very innovative on release. But it has long become inefficient in terms of costs, scaling, and governance. It’s even worse for Lotus Notes. The system architecture is 30+ years old. Performance and security aside, it lacks cloud functionality. The latter is an integral part of modern tech ecosystems.

What are the costs of maintaining legacy systems?

Cutting company spendings on software renewal may seem like a sound strategy in the short term. After all, why change stuff when the old systems are functioning just fine? But that decision may backfire in the long run thanks to the accumulation of many little expenditures needed to upkeep an outdated app.

The US Government Accountability Office states that ten of their legacy systems cost around $337 million a year to operate and maintain. How come it’s so expensive? The answer is simple: a combination of main and hidden costs.

These are the surface-level operational costs of legacy systems. They are fairly easy to account for. First, there are the management resources that are required for regular maintenance: man-hours, third-party tools, etc.

Of course, even the newest, most cutting-edge systems need regular maintenance. But maintaining an old software solution is notably more difficult. Over time it becomes harder and harder to find skilled tech support specialists that know the application and its components well enough to reliably update it. This adds to the expenses.

Finally, there’s the issue of special licensing. Some legacy applications require licenses or paid subscriptions, adding up to their overall maintenance cost. Though, there’s also the problem of these licenses or subscriptions possibly getting discontinued. This may complicate or completely block access to the software.

Now these aren’t as easy to calculate. These are various performance issues that arise as a result of using outdated solutions, which affect multiple business areas. They are not immediately obvious, but can become devastating if left unaddressed for long periods of time. Let’s look at each of these individually.

The act of maintaining outdated systems can by itself put considerable strain on your IT department. Instead of focusing on more important or exciting tasks, the employees will have to deal with constant bugfixes, compatibility issues, performance problems, and so on.

This doesn’t just reduce the amount of time and resources the team spends on doing mission-oriented projects. It also demoralizes the staff. Of course, the latter will serve to further decrease your programmers’ performance levels.

Integrations with third-party systems require just as much maintenance as the solution itself. If a legacy application is integrated with a service or system that receives consistent updates, there is a high probability that at some point the two will become incompatible.

This can deprive the software of not just some extra functionality, but of some of its core features. That means the business will have to waste its resources on finding new compatible integrations. It may even resort to buying brand new software.

A seamless data flow is integral to ensuring that the business meets all of its customer demands on time. Here, success is all about the program’s ability to quickly access and process up-to-date information.

Centralized data processing modules fulfill that purpose with flying colors. Sadly, they are absent in legacy software. The closest things it has to them are database management systems. Albeit easy to set up, they are far more disorganized and prone to significant loss of data if configured poorly.

Perhaps, the most pressing issue of all. Nobody trusts a business that doesn’t keep its own and its customers’ sensitive data safe. Your software may have been top-of-the-line in terms of security when it was first released, but those standards and protocols change very fast.

Over time, avoiding data breaches and fixing vulnerabilities will become a very arduous task. And if you don’t live up to the challenge, a single incident like that can paralyze the workflow of the entire company. That’s far less of a risk with newer technology that operates using microservices and cloud storage.

Making a good impression on the customers is a priority for any modern company. But unstable legacy software can become a huge detriment to it.

A good example is a case from 2015. The 23-year-old Microsoft Windows 3.1 system used by one Paris airport crashed because of bad weather. This left planes and dissatisfied customers stranded on the ground for hours.

Modern systems are better optimized to combine faster processes, analysis, and data flows in a way that maximizes the revenue from your business operations.

This is achieved by repurposing software resources and harnessing multiple integrations unavailable to older applications. Simply put, by using legacy systems, you’re missing out on the chance to produce more value with less effort.

How much do legacy application modernization services cost?

So you’ve decided that your software needs an upgrade. But how much will it cost you? There are several factors that go into determining the total, but the overall price can be anywhere from $40K to $150K and beyond.

We need to narrow it down a bit. Let’s take a look at what you need to take into consideration when budgeting a legacy system modernization project.

Let’s get the obvious out of the way.

The bigger the application is, the more work is required to develop it, and the more it will cost. Software size can be measured in pages or screens. Every time a user clicks a button, a menu option, or a link, they are taken to a different screen. So, for instance, the user profile and the page where the user edits their profile are classified as two different screens.

A small application contains 10 to 25 screens, a medium one goes up to 40, and a large one surpasses that number. With that in mind, modernizing a smaller app can be around $40-75K, a medium one – around $75-150K, and a large solution will go beyond that.

This notion refers to the software’s internal logic, its architecture, the amount of heavy analysis tasks it performs, conversions, scoring, number crunching, the number of nuances and permutations in the code, and so on, and so forth. This all affects how long it takes to upgrade the solution as a whole.

Note that modernizing complex software doesn’t just demand special attention in terms of coding and documentation. It also takes much longer to test, because the QA team needs to account for all the possible variables in the app performance and functionality. Of course, those extra hours will come at a price.

Integrations are kind of unpredictable when it comes to cost. Of course, it depends on their number and complexity. But some services are simply built in a way that makes them easier to integrate (credit check services like Equifax and Experian, for example).

If the app needs to integrate with some older or lesser known software, it may pose a problem. Developers may not be as familiar with the way some third-party software processes and exchanges data. They may require extra hours and resources to figure out the best approach to setting the integration up and ensuring it functions the way it’s supposed to.

You most likely have existing data that needs to be migrated from the old platform to the new one. That can be done with custom scripts that take that data from the software, reformat it, and store it in the new system accordingly.

The process sounds really simple on the surface. Yet it becomes rife with pitfalls and nuances if the two systems happen to organize their data differently. It’s something that requires lots of testing and development work, which, naturally, costs time and money.

Redesigning the user interface is one of the more fun parts of software development. But it is an investment as well. The pricing of that varies heavily depending on the number of screens, assets, custom animations, etc. Generally speaking, it’s reasonable to allocate from $8K to $16K for your UX / UI needs.

This will roughly cover creating the initial design, as well as a couple of revisions based on user feedback. Of course, if your design features a lot of custom artwork and 3D models, the price will be higher.

Companies like to justify not moving on from old software platforms by wanting to save money. But the truth is, maintaining an outdated legacy app can be far more detrimental to the enterprise budget in the long run. So while the modernization of legacy systems can be very pricey, it’s a worthwhile investment that ensures your business efficiency far into the future.

Bamboo Agile has an extensive portfolio of modernizing legacy systems. If you believe it’s time to upgrade your company productivity, security, and profits, feel free to contact us for a free consultation.