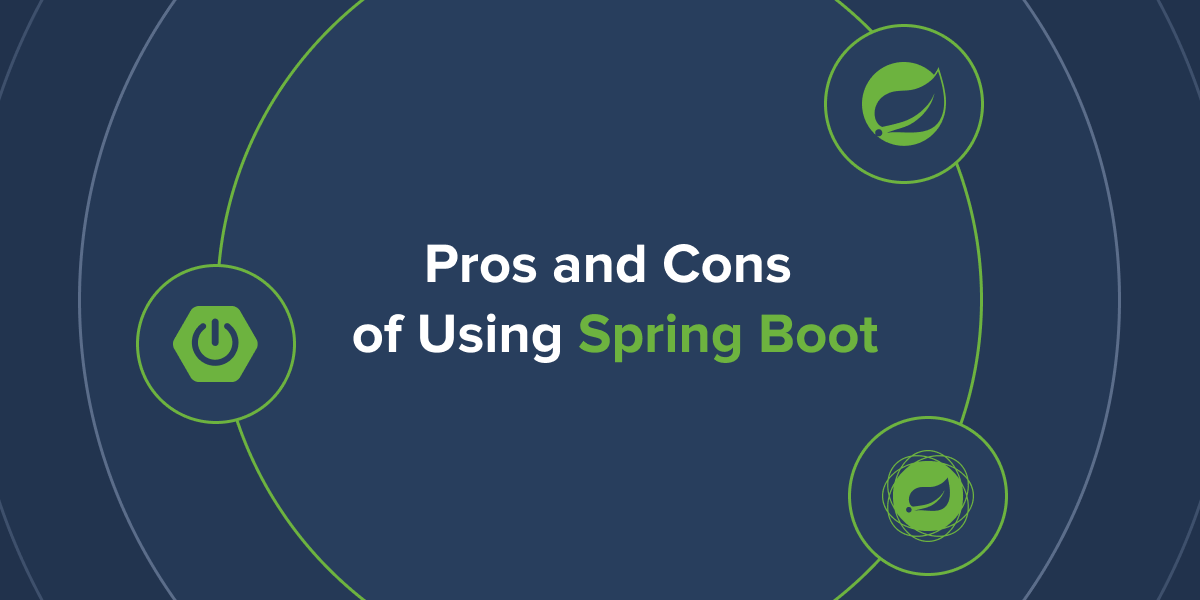 Due to the build-up of additional functionality, the structure of the Spring framework has become noticeably more complex over the last couple of years. Now, starting a new Spring project requires a lengthy setup process. Spring Boot was invented to save time and avoid configuring this framework from scratch with every new project.

What is Spring Framework

Spring is one of the most widely used frameworks for developing enterprise applications, providing a robust programming and configuration model. The creation of this framework was facilitated by the desire to simplify the development of applications on the popular Java EE technology stack from Oracle, which was very complex and difficult to use at the time.

Unlike other frameworks, Spring focuses on several areas of application functionality and provides a wide range of additional functions for them.

One of the main advantages of Spring Framework is its use of the Dependency Injection pattern. DI makes it much easier to implement the functionality that applications need, and allows to develop loosely coupled, more general classes.

Let’s look at some advantages of Spring Framework:

Despite the many advantages of Spring Framework, the lengthy preparation process involved in configuring it has contributed to the creation of Spring Boot.

Check the Talent page to find more details about open positions at Bamboo Agile and apply for a job in one of the most successful software development companies in Estonia.

Despite the advantages of Spring Framework, authors decided to provide developers with some utilities that automate the configuration procedure and speed up the process of creating and deploying Spring applications. These utilities were combined under the general name of Spring Boot.

While the Spring Framework focuses on providing flexibility, Spring Boot seeks to reduce code length and simplify web application development. By leveraging annotation and boilerplate configuration, Spring Boot reduces the time it takes to develop applications. This capability helps you create standalone applications with less or almost no configuration overhead.

To speed up the dependency management process, Spring Boot implicitly packages the required third-party dependencies for each type of Spring-based application and provides them through so-called starter packages (spring-boot-starter-web, spring-boot-starter-data-jpa, etc.).

For instance, if you want to start using Spring Data JPA to access your database, just include the spring-boot-starter-data-jpa dependency in your project and you’ll be done (no need to look for compatible Hibernate database drivers and libraries).

If you want to create a Spring web application, just add the spring-boot-starter-web dependency, which will pull all the libraries you need to develop Spring MVC applications into your project, such as spring-webmvc, jackson-json, validation-api, and Tomcat.

To say in a few words what is Spring Boot used for, it collects all common dependencies and defines them in one place, which allows developers to get to work right away instead of reinventing the wheel every time they create a new application.

Therefore, the pom.xml file contains much fewer lines when used in Spring Boot than in regular Spring.

One of the advantages of Spring Boot, that is worth mentioning is automatic configuration of the application.

If you are using spring-boot-starter-jdbc, Spring Boot automatically registers the DataSource, EntityManagerFactory, and TransactionManager beans and reads the database connection information from the application.properties file. If you are not going to use a database and do not provide any details about connecting manually, Spring Boot will automatically configure the database in the memory without any additional configuration on your part (if you have H2 or HSQL libraries). Automatic configuration can be completely overridden at any time by using user preferences.

Every Spring Boot application includes an embedded web server. Developers no longer have to worry about setting up a servlet container and deploying an application to it. The application can now run itself as an executable jar file using the built-in server. If you need to use a separate HTTP server, simply exclude the default dependencies. Spring Boot provides separate starter packages for different HTTP servers.

Building stand-alone web applications with embedded servers is not only convenient for development but also a valid solution for enterprise-grade applications; what’s more, it’s becoming increasingly useful in the world of microservices. The ability to quickly package an entire service (such as user authentication) into a standalone and fully deployable artefact that also provides an API makes installing and deploying an application much easier.

Spring Boot is part of the next generation of tools that simplify the configuration process for Spring applications. It is not a tool for automatic code generation, but a plugin for project build automation systems (supporting Maven and Gradle).

The plugin provides capabilities for testing and deploying Spring applications. The mvn spring-boot:run command runs your application on port 8080. In addition, Spring Boot allows you to package your application into a separate jar file with a full Tomcat container embedded. This approach was borrowed from the Play framework’s application deployment model (however, Spring Boot can also create traditional war files).

One of the key advantages of Spring Boot is the configuration of resources based on the content of the classpath. Spring Boot is pretty intuitive when it comes to the default configuration. You may not always agree with its choice of settings, but at least it will provide you with a working module. This is a very useful approach, especially for novice developers who can start with the default settings and make changes to them as they explore the alternatives later down the line. This is much better than answering a bunch of difficult questions every time you begin a new project. In addition, there are a number of full-fledged tutorials on Spring Boot’s official webpage. These will help you quickly understand and practically implement all the main types of projects at the initial level.

Spring Boot is still in its infancy, and it will naturally have to go through many metamorphoses before becoming fully stable. It may be too early to use it for building serious systems, but it is quite suitable for performing all sorts of personal, training, and test projects, in case you want to eliminate large amounts of unproductive, routine work that is in no way related to the creation of useful functionality.

As far as Spring Boot’s potential for growing into a serious development tool is concerned, the presence of acceptable technical documentation looks very encouraging.

Now let’s take a closer look at the pros and cons of using Spring Boot.

Advantages of a Spring Boot application

Spring Boot is designed to make the Spring Framework easier to use. Spring provides a loosely coupled application, which is a great feature by itself. However, when there are several loosely coupled blocks involved, keeping track of them all becomes a tedious and thankless task. This is where Spring Boot comes in, helping you keep things simple with the following features:

With features like auto-configuration, Spring Boot saves you the hassle of coding and unnecessary configuration. The Spring Framework doesn’t just offer you features like dependency injection or transaction processing, it also serves as the foundation for other Spring frameworks. The best example of this is Spring Boot. Spring Boot uses the Spring Framework as its foundation. It simplifies Spring dependencies and runs applications directly from the command line. It also doesn’t require an external application container. Spring Boot helps control and customize application components externally.

In spite of many advantages of Spring Boot, it still has a couple of drawbacks that you should keep in mind:

Check the Talent page to find more details about open positions at Bamboo Agile and apply for a job in one of the most successful software development companies in Estonia.

Spring Boot has become an integral part of the Java ecosystem, offering an efficient and scalable toolbox for building Spring applications with a microservices architecture. It speeds up the development and deployment processes by using intuitive default settings for unit and integration tests. What’s more, Spring Boot helps developers build robust applications with clear and secure configurations without spending a lot of time and effort on figuring out the intricacies of Spring. If you’re not sure about whether or not you should use this solution for your Java project, carefully review the pros and cons of using Spring Boot, its core features, and see how they align with your business goals. Alternatively, you can entrust a reliable software vendor with the development process. In that case, Bamboo Agile can become your trusted partner.

Contact us for a free consultation – and get ready to see some outstanding results!