Top 7 JavaScript Frameworks and Libraries for Web Development in 2021 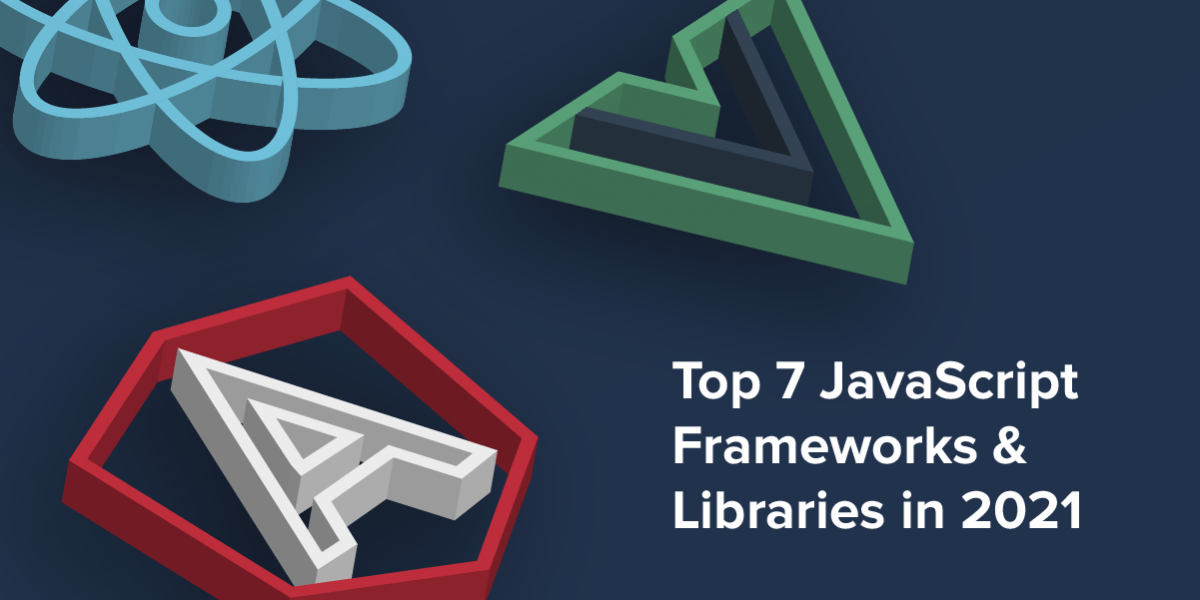 JavaScript is a cross-platform programming language that allows you to work with frontend, backend, and mobile app development. It is considered to be one of the most popular and demanded programming languages worldwide. Today, almost no web page is complete without JavaScript-based interactive features.

What is a JS Framework?

JS frameworks are tools for building dynamic web, mobile, and desktop applications in the JavaScript language. With their help, you can develop full-fledged sites and functional modules alike. Full-fledged frameworks are much better suited for the first task, while for the second, it is recommended to use lighter weight frameworks or libraries.

The advantages of using JS Frameworks

From a large number of advantages, we can distinguish several key ones:

Angular is a framework from Google for building client applications. First of all, it is aimed at developing SPA solutions. In this regard, Angular came from Angular JS. At the same time, it’s not an update to its predecessor, but a fundamentally new framework.

React is an open-source JavaScript library for developing user interfaces. It has been developed and maintained by Facebook, Instagram, and the community of individual developers and corporations. Its goal is to provide high speed, simplicity, and scalability. Moreover, React is often used in tandem with other libraries for developing user interfaces.

Vue is a progressive framework for building user interfaces. Unlike large monolithic frameworks, Vue is perfectly suitable for gradual implementation. Its core primarily solves the problems of the presentation level, which simplifies integration with other libraries and existing projects. What’s more, Vue is great for building complex single-page applications when it is used in conjunction with modern tools and additional libraries.

In essence, Meteor is a platform for building highly interactive modular client-server applications. This full-stack platform is designed for real-time web application development that enables seamless communication between frontend and backend. The DDP protocol supported by WebSockets or AJAX is used to communicate with most modern browsers.

Aurelia is an open-source frontend framework that consists of function-oriented modules such as plugins, routing, testing, dependency injection, and more. The environment can be used to develop web applications and applications for mobile devices.

Svelte.js is a modern open-source JavaScript framework that allows you to write easy-to-understand JavaScript code that is then compiled into a highly efficient program reactively running in the browser.

Express is a popular JavaScript web framework that runs inside the node.js runtime environment and is designed for building web applications and APIs. It’s a de facto choice for Node.js.

Choosing the perfect framework for developing your software from the wide range provided by JavaScript is a daunting task. With the passage of time and constantly changing customer needs, new frameworks will keep popping up on the dev market. And they will absolutely have more interesting features to meet those growing demands. So, developers really ought to keep track of these updates. Still, the most appropriate decision would be to entrust the matter to coding professionals, who are all well aware of the advantages and disadvantages of every framework and can, therefore, orchestrate them in a way that guarantees an effective solution.

Bamboo Agile is a team of professionals that develops web applications on the most popular and demanded JavaScript frameworks and libraries such as Angular, React, Vue, Express, and others. When you’re in need of help with your web development, leave your contacts in the form below – we will come back to you to discuss your custom software project!