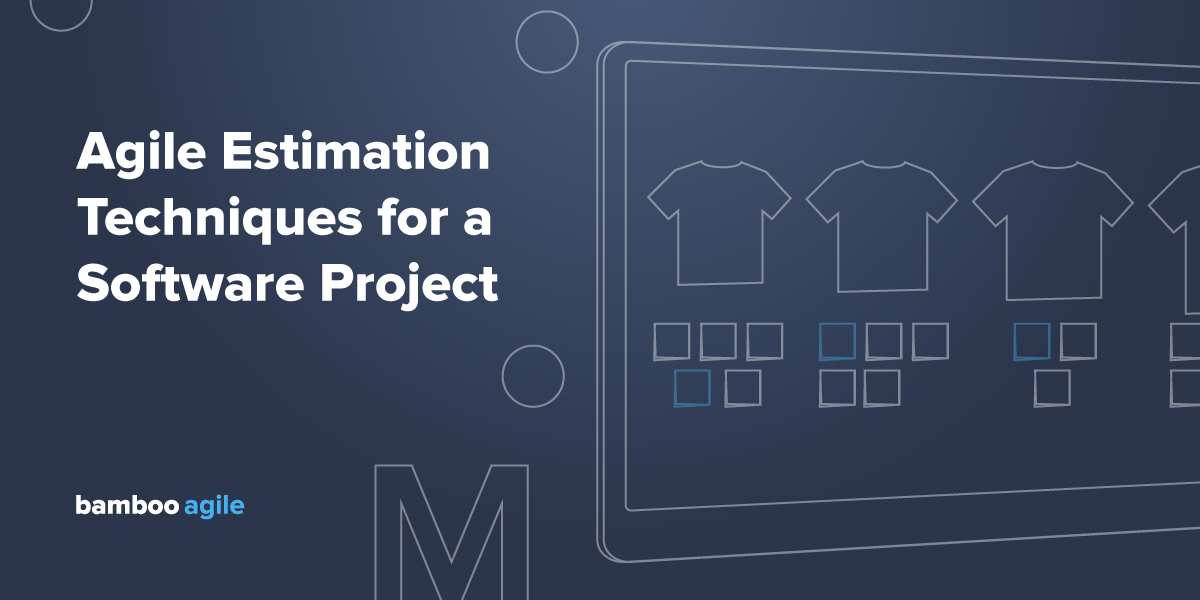 When does project estimation happen?

Before we start describing the methods for estimating labor costs in an Agile project, let’s talk about what it is for and what it affects. Let’s try to look at the topic of the article through the eyes of the project client.

Any project has several stages of development:

In the above-mentioned step-by-step structure, software project estimation – of labor costs, in this case – plays an extremely important role since it directly affects Planning, which in turn affects the Performance phase.

Consequently, an incorrect estimation will eventually lead to non-adherence to the project development plans, which will throw the project back to the estimation stage because of the need to re-estimate the tasks.

This is a normal practice for short distances in flexible methodologies like Agile, and a very bad one when it comes to classical development methodologies where the project price and implementation plans are fixed and secured by contractual obligations – it implies significant losses of both time and finance.

Interestingly, the Estimation phase itself, which is the pre-planning stage, is very dependent on it. The choice of assessment methods and their values depends on what type of planning is used in our project. For example:

The software project estimation methods that we will talk about today are related to the second type of planning since it is most often used in software development.

We help our potential clients understand that this planning method helps to reduce the risks of missing deadlines, since the relation between the current state of the project and the one planned in the roadmap is monitored with enviable consistency. This allows you to quickly focus on individual labor-intensive tasks and to reallocate resources according to the project requirements.

And just like that, we’ve reached the Estimation stage.

What is software project estimation?

Estimation is the measured complexity of task implementation expressed by a value.

The values can be traditional – hours or man-hours, and non-traditional – Story points, T-shirt sizes, a difficulty scale.

Why you need software project estimation?

The need for a software project estimation appears when the client has provided a list of features for the team to implement, with each task having an assigned priority. This is a laborious process where the entire development team (here, for the sake of the most efficient result, I mean everyone working on the project: designers, testers, etc.) must reach a consensus and determine the complexity of a particular task. The estimation will allow the team to see the likelihood of finishing the assigned tasks within a certain time period – for example, Sprint.

Before talking about the Agile estimation techniques, it is worth mentioning the principles of software project estimation as a whole. This will allow you to better understand the methods themselves and the logic behind their application.

Which techniques of software project estimation can be used in Agile?

What is Planning Poker

Being one of the most popular Agile story point estimation techniques, Planning Poker is based on the use of scores to reflect the complexity of the task. The base is the Fibonacci numbers 0, 1, 2, 3, 5, 8, 13, 20, 40, and 100, which are plotted on cards similar to those used to play popular card games.

How to use Planning Poker

The principle is that each team member receives a deck of cards with a list of points and gives his evaluation of the task after all the clarifications and discussions on its implementation.

Nowadays, Planning Poker is one of the most popular methods of estimating tasks in Agile, due to its ability to quickly and accurately determine the difficulty of a problem.

The downside of Planning Poker is its ineffectiveness in large teams and in the estimation of heavy tasks. Therefore, many teams have an agreement that a task that has received a certain high score should be decomposed and its subtasks should be evaluated separately.

What is T-Shirt Sizes

The T-shirt Sizes is an Agile Story point estimation technique based on the clothing sizing system. There a variety of sizes exists, starting from the smallest XS to the largest XL, with S, M and L sitting inbetween. Each of the abovementioned sizes is equated to the complexity level of a certain task.

How to use T-Shirt Sizes

The key to using this technique is a quick discussion of ways to achieve success in development and subsequent evaluation.

This method is very good for quick and rough Agile estimation of a software project, but it may create precision problems due to the rather narrow range of the estimation base, namely the sizes of the T-shirts themselves.

What is Dot Voting

Dot Voting is the visual result of the Agile estimation concerning the priority of the task. It allows the team to see the whole picture for the entire set of tasks by using a number of points (markers).

How to use Dot Voting

The main idea behind this Agile estimation technique lies in giving public access to all the required tasks and the ability of team members to sequentially define tasks by their complexity using a limited set of points.

It’s an effective method when the number of tasks is small, and works great for their visual analysis. But it’s not the most reliable method of assessment, as it is very superficial and serves as more of a tool for deciding the order of tasks in a sprint.

What is Ordering Rule

Ordering Rule is a game estimation technique that involves the interaction of all members of the team; it aims at equating a set of tasks to a difficulty scale. The scale reflects the complexity of the task and has a minimum initial value and a maximum final value in terms of labor intensity. Intermediate difficulty segments are set between the lowest and ultimate values.

How to use Ordering Rule

This technique leads the team to a fairly high indicator of the quality of the estimation of tasks, but it takes a long time to implement, and is, therefore, only suitable for a small number of tasks per meeting.

Although we haven’t touched on every method currently out there, but these four are the most popular ways of estimating Agile projects. Since every team following the Agile framework has its own workflow specifics, flexible methodologies allow you to combine and change Agile estimation techniques in order to achieve the best possible end result.