Monolith vs Microservices: Everything You Need To Know 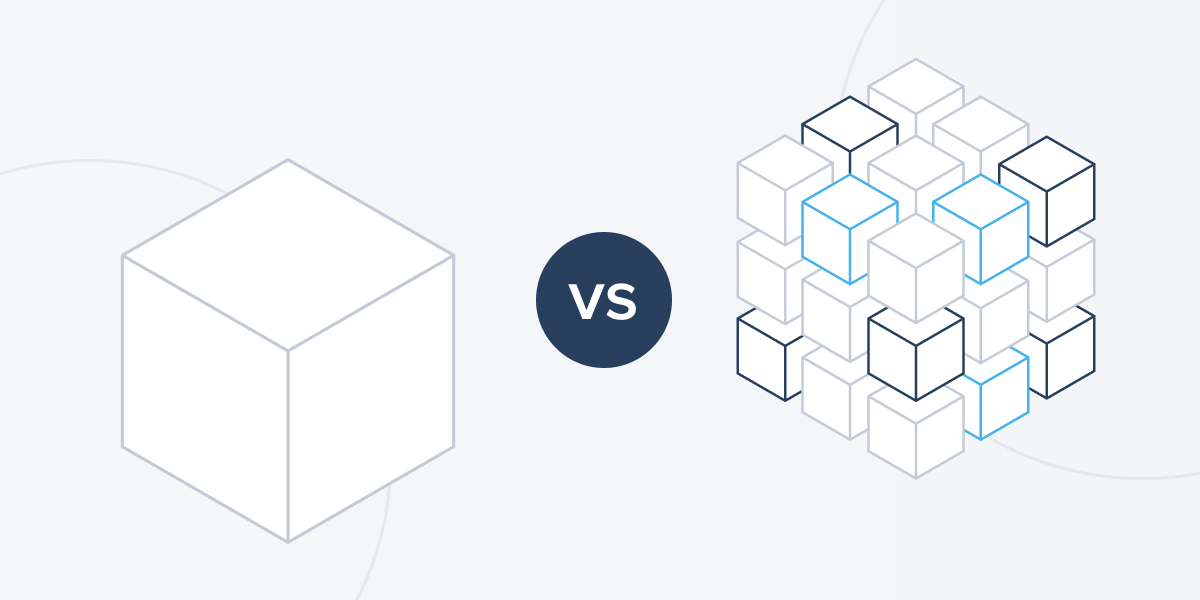 “Do we start with a monolithic architecture or do we jump straight to microservices?” is a question not enough startups ask themselves. That is because most think the answer’s obvious: monolith is the default choice for budding companies. But is it really that simple?

When a piece of software is built to scale, adopting a microservices architecture becomes only a matter of time. In that case, another question arises: why go through the costly migration process, when you can start with microservices development instead?

To answer these inquiries, one would have to first explore the pros and cons of both approaches to architecture. So we’ll do exactly that.

Monolith vs Microservices: Know the Difference

Let’s establish what monolith and microservices architectures are.

Monolithic architecture is considered a traditional way of building software. A monolithic app is a single indivisible unit, which usually comprises a server-side application, a client-side interface, and a database. Here, all the functions are managed and served in one place.

Monolithic apps tend to have one large code base. And whenever developers want to update a certain aspect of the application, they have to modify the entire software. So, because of the app’s unified nature, every minor change affects the whole stack.

Such architecture allows developers to make changes to certain parts of the application without having to update the whole app. Also, while the entire functionality is split into independently deployable modules, they communicate with each other using APIs.

So which is it?

Now that we’ve defined what a monolithic architecture is, what a microservices architecture is, and what their strengths and weaknesses are, we can decide which one suits your startup best.

Start with a monolith if…

Start with microservices if…

If you’ve made the decision to use a microservices architecture from the start, then you’re pretty much set for the long run.

One opportunity that’s worth considering, however, is getting help from a third-party development company in case your team is either too small or too inexperienced to consistently handle microservices development. Outsourcing system maintenance or even the development process itself could be more cost-effective than headhunting and employing full-time in-house specialists.

But what if you’ve decided that a monolith architecture is more appropriate for your current project? If it’s something that won’t need to majorly expand, you’re good to go. However, if your software is meant to scale in the future, migration to microservices is something you ought to think about.

Let’s look at each option in a little more detail.

Building a Microservices Architecture by Using an API Gateway

Say, you want to create a native mobile client for a shopping app. That shopping application needs a product page, which displays lots of information: product name, price, and description; customer reviews, number of items in the shopping cart, shipping options, etc.

If the solution is monolithic, the mobile client will retrieve the necessary data with a REST call to the app (GET https://api.company.com/productdetails/productId). That request will be routed to one of the many identical application instances by a load balancer. Then the app will query different database tables and return the response to the client.

If the app uses microservices, however, each piece of data is owned by a different microservice (i.e. customer reviews belong to the review service, shipping options belong to the shipping service, etc.). Because of that, there are multiple ways to access the needed information:

1.Make requests to each of the microservices directly. Here, each microservice has a public endpoint (https://serviceName.api.company.name) which is mapped to its load balancer, and the mobile client makes a request to each of the services via those endpoints. However, this approach is rather inefficient.

Firstly, the client will need to make numerous requests just to load one product page. This isn’t a huge problem when an app is simple. But in more complex solutions, the number of requests can go well into the hundreds. Public Internet and mobile networks are very likely to struggle with processing this amount of information. Plus, it seriously complicates the client code.

Secondly, not all microservices will have web-friendly protocols (for example, Thrift binary RPC and the AMQP messaging protocol are more suitable for internal use). The app should use protocols like HTTP and WebSocket outside the firewall.

And finally, it makes refactoring microservices a lot more difficult.

2.Use an API gateway. A much more common and useful approach. An API gateway is a server that acts as a single entry point into the system and performs multiple functions, including authentication, monitoring, load balancing, caching, and others.

Every client request will go through the API gateway before being routed to the appropriate microservice. API gateways can also aggregate the results of requests to multiple microservices and translate web-unfriendly protocols.

Of course, it also has its drawbacks. An API gateway needs to be developed, deployed, and consistently managed. The gateway also needs to be updated to expose each microservice’s endpoints, so the process of updating it has to be as lightweight as possible.

Now let’s look at the peculiarities of API gateway implementation.

Good performance and scalability are crucial to any API gateway. Because of that, API gateways are often built on platforms that support asynchronous non-blocking I/O. There are many technologies that can help implement a scalable API gateway: there’s JVM that supports NIO-based frameworks (Spring Reactor, Netty, Vertx), there’s Node.js based on Chrome’s JavaScript engine, and there’s NGINX Plus, which is perfect for high-performance projects.

API gateways tend to perform independent requests concurrently to minimize response times. However, sometimes, there are dependencies between requests. Because of that, API composition code using the traditional asynchronous callback approach is very likely to get tangled and difficult to understand. Using a declarative style of code with a reactive approach alleviates that problem. Future in Scala, CompletableFuture in Java 8, and Promise in JavaScript are just some of the reactive abstractions available on the market.

Your API gateway has to know the IP address and port of each microservice it communicates with. Infrastructure services like message brokers usually have a static location that can be specified through OS environment variables. On the other hand, determining the location of an application service is often a challenge, since it is dynamic. That’s why the API gateway needs a service discovery mechanism: either Server-Side Discovery or Client-Side Discovery. Note that if your system uses the latter, the API gateway must be able to query the Service Registry.

Partial failure is something that arises when one service calls another, and the other service is responding slowly or is unavailable. How your API gateway handles that failure depends on the scenario. For example, if the recommendation service in an online store is unresponsive with some product details, the API should return the ones that are available to the customer, as they can still be useful. The recommendations can also be left empty or show a hardwired top ten list. API can also return cached data in case the pricing service is unresponsive (since product prices change infrequently), and show an error message if the product information service is unavailable.

Let’s have a more in-depth look at the issue.

As was already mentioned, inter-process communication in microservices comes in two types:

However, there’s one more important distinction:

And the kinds of one-to-many interactions are:

Every service usually uses a combination of different interaction styles. Some services can function with a single IPC mechanism, but most require multiple.

Migration from Monolith to Microservices

There are two common strategies for migrating a monolithic app to microservices.

The so-called Big Bang rewrite is just as radical as it sounds. It basically involves rewriting the app for microservices from scratch. The straightforwardness of this method may sound appealing to some, but it’s a very risky approach that’s likely to end in failure.

A far safer strategy is the Strangler Application method. Its name comes from the strangler vine that grows around a tree to reach the sunlight above the thick forest canopy. When the tree dies, only a tree-shaped vine remains.

Of course, this is a very brief description of the process. For a more detailed example of migrating a monolith app to microservices, check out this case study.

Setting up microservices doesn’t have to be difficult or costly. If you’re a startup that wants to employ a microservices architecture with minimal stress involved, these tips will help you cut corners both in terms of convenience and pricing.

Stick to what’s tried-and-true, unless using your custom tools is absolutely necessary. Plus, your whole application (that is, all your microservices) is better off stored in a single repository with a single CD deployment pipeline.

Hosting your app in a single Kubernetes cluster will streamline your security model. Authenticate at the gateway, treat internal connections as trusted, and run the cluster on one virtual machine. You won’t need more than one until you require greater performance or reliability.

Don’t replicate any of your microservices, unless you need heightened performance or plain redundancy.

If you’re just starting out, don’t bother with automated testing – you will need it, but only eventually. For the time being, put some effort into writing a script that can quickly boot the application to a testable state (with database fixtures and whatnot). This will make manual testing much more efficient.

Have an automated CD pipeline ready from day one of going to production. In a way, this is the most important part of your entire app: getting consistent feedback from customers is the lifeblood of any startup.

You may ask, “Doesn’t using a single repository and a single deployment pipeline defeat the point of microservices?” To a degree, yes, but only during the initial development phase.
You’ll be able to easily extract your microservices to separate code repositories later on. When you feel like the time for that has come, use the meta tool. It will allow your independent repositories to act as a single repository, which will greatly simplify development.

It’s easy to see the benefits of both monolith and microservices architectures. Both work amazingly in their respective contexts and are equally worthy of consideration. Simply follow the guidelines set up in this article and find out which architecture will bring the best out of your application.
In case your company wants to go in for microservices development, but isn’t sure where to begin, feel free to contact our specialists for a free consultation. Whether you want to develop an app from scratch, migrate a monolith solution to microservices, or get help in deciding which course of action would be the most suitable for your project, the experts of Bamboo Agile will be happy to lend a hand.